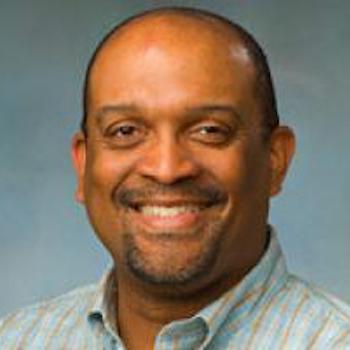 Carlos Jones has worked extensively in arts education and community arts programing. He was founder and director of the Los Angeles dance training facility Academy 331, Founding Artistic Director of Teen Dance Company in Palo Alto, California and served as artistic advisor to In-sync Dance Theater in Glendale, California. In addition to traditional arts programming, Carlos has also developed and implemented programs for children and youth with disabilities. His work in this area lead him to artistic associate with Bethune Theaterdanse’s Infinite Dreams, a program that brings dance to the disabled.

Mr. Jones holds an MFA from the University of California – Irvine and has served on the faculties of UCLA, UC-Irvine, Chapman University, Loyola Marymount University and St. Cloud State University. Professor Jones belongs to a coveted list of SUNY Diversity Faculty Fellows and is tenured professor of musical theater and dance at SUNY Buffalo State, where he currently holds the position of Associate Dean of the School of Arts & Humanities. He adds to his merits the roll of author. In addition to his notable publication in Middle Schools Journal, he is a contributing author to the book Jazz Dance: A History of the Roots and Branches.

Mr. Jones has a body of work that extends from the concert state to theater to television and film. His eclectic background has brought him recognition as an international artist. Concert appearances include work with such companies as: Loretta Livingston, Bethune Theatredanse, Dance Kansas City Modern/Jazz Company, and his own Carlos jones & Company. Among his theatrical credits are Some Like it Hot, Man of La Mancha, It’s a Pretty Good Life and Sesame Street Live to name a few. Mr. Jones landed in the movies I’ll Do Anything, Dance With Me, and Uptown Girls and was featured the television series Cybill, Howie, the Nanny, and the Drew Carey Show.

As a director/choreographer Jones is prolific. His concert works have been presented with San Jose Dance Company, Movement Source, Dance Spectrum Alaska, Adage Repertory Company, Bethune Theaterdanse, and Jazz Antiqua Music & Dance Ensemble among others. Theatrical directing and choreography includes: Four Guys Names José and Una Mujer names Maria, History of White Music, Saucy Jack and the Space Vixens, Reefer Madness, West Side Story, Black Nativity, She Hysteric a one woman show with SNL veteran Ellen Gleghorne, Once Upon a Mattress under the direction of Carol Burnet and Hair directed by Broadway legend André DeShields. In addition, he has created dance segments for a number of video and film productions including the award winning film short, Insurance Inc.