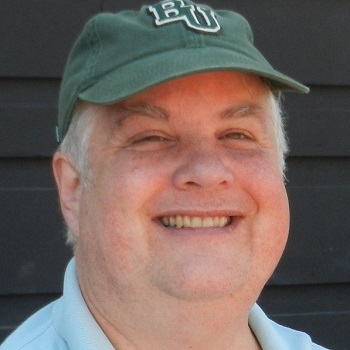 Tom Bartenstein earned his undergraduate degree in Mathematics at Swarthmore College in 1979. He was employed by IBM in Endicott, where he worked on a corporate-wide system to transfer printed-circuit-board designs to manufacturing in the 1980’s, and then worked on software to generate test data for integrated circuits, specializing in diagnostics; if the chip failed, which transistor was broken and why. He published papers and holds many patents in diagnostics. In the 2000’s, the test group was transferred from IBM to Cadence Design Inc., a Silicon Valley Computer Aided Design company, where he won the Innovator of the Year award in 2010. In 2010, Tom left industry to pursue his lifelong dream of teaching. He got his PhD at Binghamton University in 2017, concentrating on Programming Languages, and has been teaching in the Computer Science department since 2012. Tom’s goal in teaching is to pass on the love of learning he learned as an undergraduate at Swarthmore; to inspire his students as he was inspired. Tom has been investigating flipped classrooms and on-line teaching since 2017 but did not commit to a fully asynchronous on-line course until the Fall of 2020, forced by Covid-19, and asked to teach a class in which 1/3 of the students were international students who could not make it to campus. Student feedback from that class included: “He was the best teacher I ever had. Wish I could have gotten this class offline just because it would be so much funner than it was async. However there couldn’t have been a better online integration of the course. He was supportive and answered my questions about other subjects and very understanding.”

Examples of Tom’s work include a dynamic online syllabus and a methodology to create asynchronous videos that combines Panopto and Camtasia.