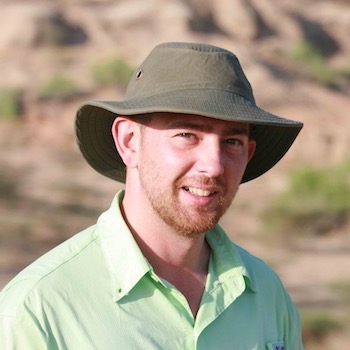 Jason Lewis, Ph.D., is a researcher who studies human evolution, archaeology and physical anthropology.  He is originally from Pennsylvania and attended the now infamous Dover Area High School, which in 2005-2006 was embroiled in a very important intelligent design/evolution court case.  He went on to receive his Bachelors and Masters degrees from the University of Pennsylvania in 2004 and his PhD at Stanford University in 2011.  He is Assistant Director of Stony Brook University’s Turkana Basin Institute and a lecturer in the Department of Anthropology.  Jason’s research deals with the evidence of human behavioral and morphological evolution through studying the fossils of our ancestors and other mammals.  He is co-director, with Dr. Sonia Harmand, of the West Turkana Archaeological Project, which is a multidisciplinary and international project that is reconstructing the activities of the earliest stone-tool makers on the ancient landscapes of the Turkana Basin in northeastern Kenya.  The team recently announced the discovery of the oldest known archaeological site in the world at Lomekwi 3.

The online course Dr. Lewis developed for SBU, Zombiology: What the Walking Dead Can Teach Us about Real Humans, is an interdisciplinary examination of important topics in anthropology, archaeology, epidemiology, and allied fields, all through the lens of common aspects seen in popular zombie lore in television and film.

The most surprising aspect of running an online course, compared with face to face courses, is how much the students interact with one another through the discussion boards and other collaborative functions.  If those same 60 or more students were in a brick-and-mortar classroom, it’d be hard to get more than a few sentence responses from them and not everyone could participate in the discussion.  With online functionality, every student can engage in a lengthy discussion, and they are probably more used to conversing in these types of fora than most professors.